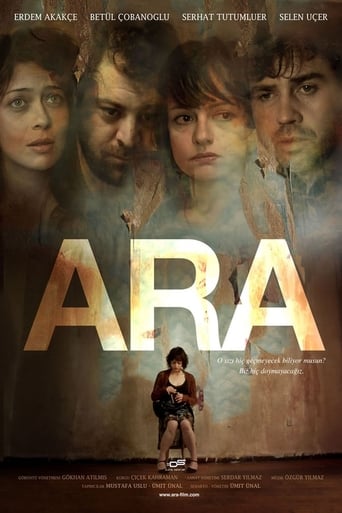 Ara is a movie released 2008 director is Ümit Ünal, has a duration of 89 minutes, this film was released in the languages Türkçe on a budget with a score on the IMDB 4.5 and with a cast of actors Serhat Tutumluer Selen Uçer Erdem Akakçe . Ara is the story of four people and an empty house. These people are stuck between their past and stormy relationships, between Istanbul and the "homes" they can't get back, between their innermost secrets and the lies they tell, between east and west. They are stuck in the "space between". The whole action takes place in an almost empty flat which is belong to one of the characters. The camera goes out only once. But various other visuals from commercials, TV series' that has been shot in the same flat, sneak into the film. Spanning around 10 years, the story is told between intervals of these visuals. Turkey has been through a huge change in the last 20-30 years. The modest country of the recent past is a faded memory compared to the consumerist life style of modern day. It is the time of ambitious people who can do anything to "live well", to "break through". This is the story of a small group of people who manage to "live well" but can't help getting lost in a spiritual vacuum.

Write a review for Ara